The enhanced evaporation technology market is still advancing, and different systems are being developed and refined daily.

When examining natural evaporation, there are many factors, such as water temperature, wind, humidity, water vapor pressure, dew point, outside temperature, and many more. There are also many factors to consider when choosing to introduce enhanced evaporation into your process.

Atomizer Hub - The rotary atomizer hub Figure 1 is attached to the motor, and the water flows through several tubes around the motor down into the hub nearest the motor shaft. The water dually fractures through the hub, which has 180 small holes and 300 serrations. The water flow uses very little water pressure. The water flow is similar to a garden hose faucet and engineered for a maximum flow rate of 10 GPM.

The water flow rate is fractured through e3 Solutions' patented hub using centrifugal force. This process allows higher TDS waters to flow smoothly through the atomizing hub without causing significant friction or wear. In Figure 2, you will notice a close-up view of the e3 Solutions' atomizer hub using a 5 GPM flow rate through the hub. The pictures are time lapsed from 0 RPM to show the evolution of fracturing water once the atomizing hub begins to rotate.

As the atomizer gains speed above 500 RPM, you will notice the 5 GPM flow turned into a fine mist and in the shape of a V-pattern being horizontally distributed (Figure 3). The horizontal V-pattern gives the small micron droplets a little boost upwards and outwards from the hub, allowing maximum interaction with the surrounding air. The surrounding air moves the mist horizontally across the water's surface dispersing and mixing with the available dry air. 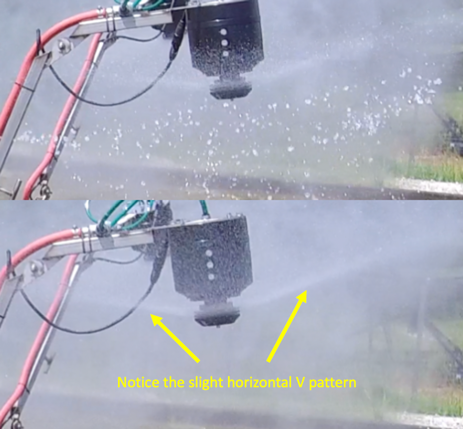 Once the atomizer reaches higher speeds, the droplets become smaller, creating more surface area in the volume of throughput. See our droplet study. The only way to view the size of these small droplets is through a laser. The laser is positioned 12” away from the atomizer hub, and the full spectrum analysis is performed. After the results are collected, the results reveal the average micron spectra of the droplets created and converted to volumetric percentages and additional surface area. e3 Solutions' spectrum analysis revealed the droplet spectrum for most operational settings is 80% of the water volume was 150 microns or less with averages between 50 to 120 microns.

Why is it essential to know droplet spectrums for enhanced evaporation equipment? 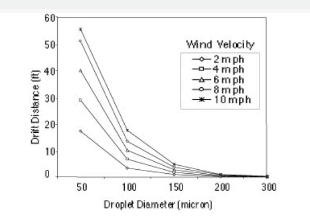 There are two main reasons, one is related to performance, and the other is related to overspray conditions. An Ohio State drift study concluded that water droplets < 50 microns evaporate entirely within 18 inches from the discharge point in relative humidity levels between 20-80%. See Figure 4. The same study also analyzes the drift distances of different size droplets using changing weather and wind speed inputs.

Rotary atomization allows for the manipulation of droplet sizes by changing the speed of the atomizer which allows control during overspray conditions.

Spiral and pressure nozzles only operate in an on-and-off operation to control overspray. Therefore, the only way to change droplet sizes is through nozzle replacement or water pressure changes. 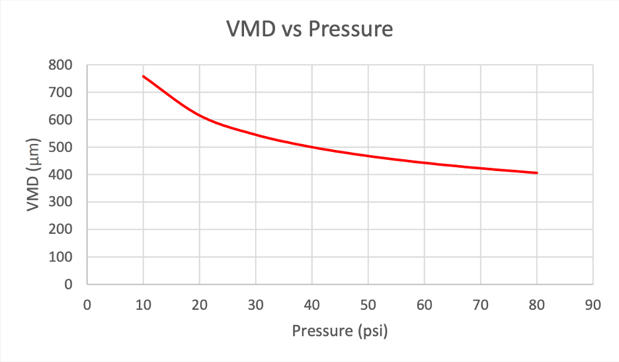 One of the top benefits of using our rotary atomizers versus pressurized nozzles is our flow rate design.

This results in no clogging or buildup once the water is centrifugally forced out of the atomizing hub.  Figure 6 shows the e3 Solutions' Varimax atomizing hub after several months of operating in 90,000 TDS-produced water.  Figure 7 shows competitive pressurized nozzle clogging in a high TDS application. 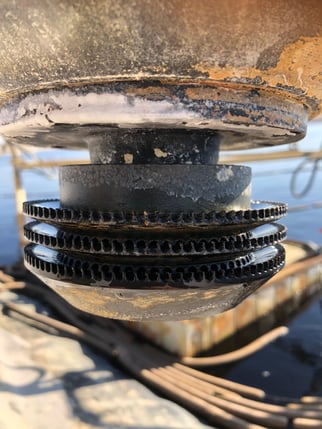 These nozzles are spaced very tightly around the end of the cannon creating multiple collisions of 500-micron droplets due to each nozzle having a 100° cone spray angle. See the nozzle cone spray video that shows the dispersion angle. Several studies regarding the collision coalescence of water droplets prove droplets increase in size as they move away from the nozzle.

“During this process, smaller droplets collide, form larger droplets, and lose their momentum due to drag. Thus, the droplet diameter starts increasing away from the nozzle. As the droplets become larger and slower, the probability of subsequent droplet-droplet collision increases, resulting in further coalescence.”  See Figure 8 for a closer look at the coalescence location beyond the initial fracturing from a pressure hollow-core nozzle.

In a recent white paper offered at a mining conference, it explains the use of the 500-micron nozzle from Spraying Systems Co. The main reason for the choice of the nozzle is that it provides higher flow rates and is less likely to clog.
“Large-bore nozzles were selected to maximize throughput and prevent blockages by entrained solids.” The paper continues by stating that a single unit can pump 600 GPM and blow it up to 150’ high into the air. The most intriguing point made in this paper is the 50% evaporation rate based solely on droplet size reduction and not droplet reduction.
In the reference section of the paper, it mentions the droplet size information used was from a dust suppression upgrade project using the same Spraying Systems Co. nozzle. However, in the reference mentioned, it seems to suggest the complete opposite of using the nozzle size and flow rates for evaporation.
Here are the critical highlights from the Project showing that the best use of the same nozzles is for dust suppression:


Figure 9 shows the light rainfall effects of shooting 500-micron water over a large open-pit mine wall, and the results in the image speak for themselves.

The question to consider in using snow cannon pressurized nozzle technology is do you have over 1000m of drop on your project site for a 500-micron drop to evaporate? 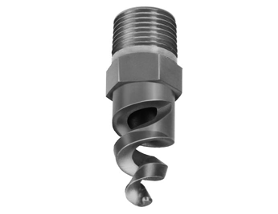 Other Types of Nozzles
Bete and Spray Systems manufactures a typical spiral nozzle for disposal purposes. Spiral nozzles need pressures between 40 to 400 psi to gain needed flow rates. The snow cannon system places around 30 of these nozzles on a 2” ring and are placed tightly together and angled towards the inner core of the cannon face.

Flow rates vary based on the pressure provided by secondary pump systems. The increased pressure from the pump system increases flow rates through the spiral nozzle and increases atomization.

Because pressures are higher with spiral nozzles, wear is a considerable challenge to detect. As these nozzles deteriorate and wear, increased flow rates or lower spraying pressures increase droplet size.

Figure 11 shows how difficult it is to monitor wear in a spiral nozzle. In applications with higher TDS, nozzle tip wear would be difficult to detect and, in essence, create challenges in evaporation droplet sizes, not to mention the increased coalescing of drops. 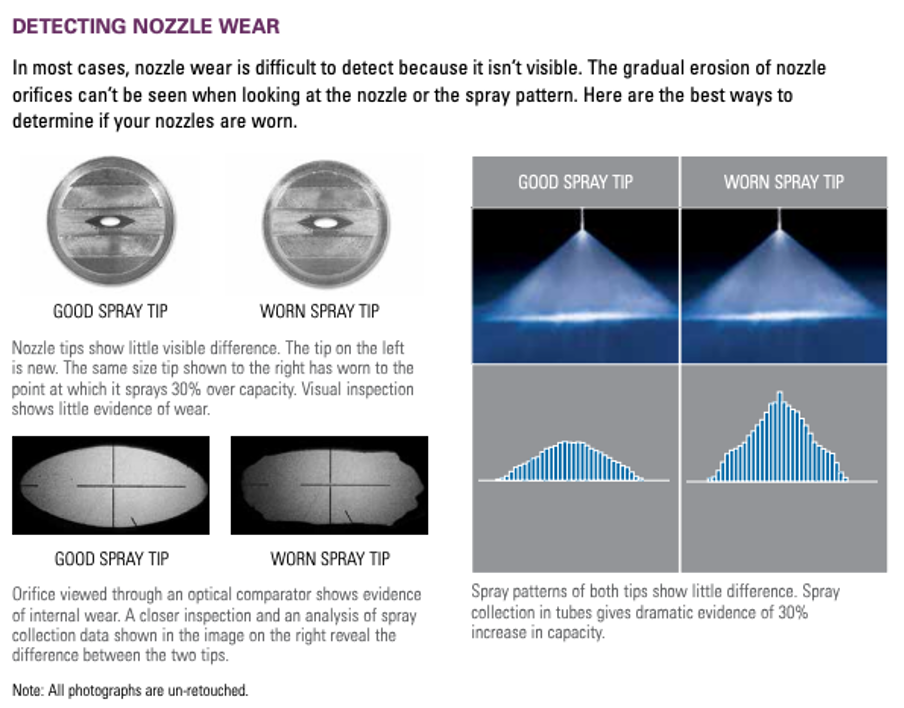 Figure 12  average droplet sizes produced from spiral nozzles are shown in Spray Systems Technical Reference Appendix with a snapshot shown. Based on typical pressures and flow rates, the average micron calculation for a hollow cone spiral nozzle is between 200 microns at a flow rate of 0.16 GPM to 1250 microns at 38 GPM.

The approximate flow rate for a 30-nozzle system would be approximately 3.6 GPM, which would likely place the droplet sizing between 300-400 microns, making this nozzle friendlier for dust suppression.

Figure 13 for the data provided by Bete. Bete provided additional data for smaller nozzles that are not as clog-resistant and have D32 droplet sizes at 112 and 140 microns. The models offered were the TF6NN and TF8NN.

The snow cannon design used in many evaporation projects uses the concept of saturating the flow of ambient air with lots of water flow. The coalesced water begins its saturation point at the end of the cannon to cool the temperatures below wet bulb when mixing with outside ambient air. Once the wet-bulb temperatures lower, snowmaking potential rises mostly in high altitudinal locations.

Figure 14 shows the high amounts of saturation at the end of the fan-style evaporator. A two-year consumptive water loss from man-made snow study determined a mean loss of only 6% from evaporation and sublimation during initial loss calculations.

When you saturate the outside air to 100% humidity, the remaining water falls back to the surface, similar to rain. 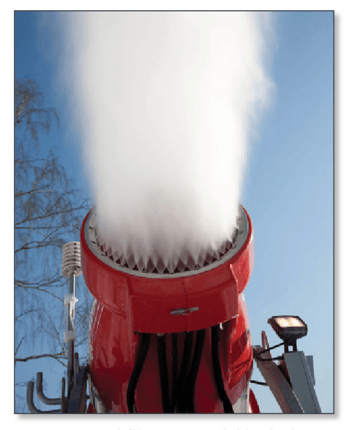 The only in-depth evaporation study found using fan-style cannons was performed in the Southeast United States near Savannah, GA. Due to the significant fallback associated with these styles of evaporation systems, much lower volumes of water were used with the spiral nozzles so that data could be collected.

The study concluded if significant fallback was tolerable, then the expectation of evaporation efficiency would be 10-12 GPM from the 70 GPM spray rate. This is a 14% modeled evaporation rate during daylight operation only and was never confirmed directly from the study.

One of the other limiting variables for the fan-style cannon evaporators is when they operate from the land. Overspray concerns from differing wind directions throughout the day cause shutdowns that lower production. 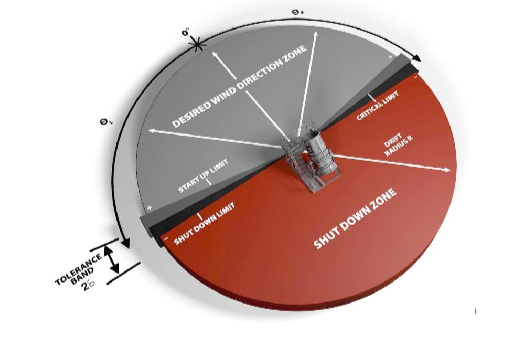 Figure 16 land-based cannon configurations have difficulty when winds blow back towards the saturated blast zone, which causes a severe overspray condition back onto the land behind the system. 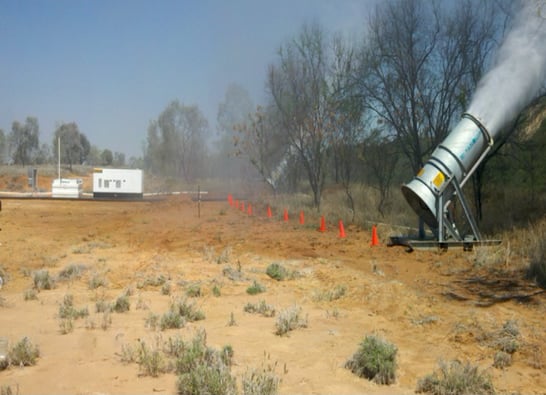 Figures 17-18, these show the typical way cannons combat overspray to operate without shutting off. The cannons often get lowered to a position of shooting the saturated stream directly back into the ponded water. 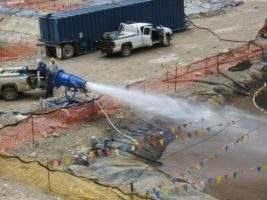 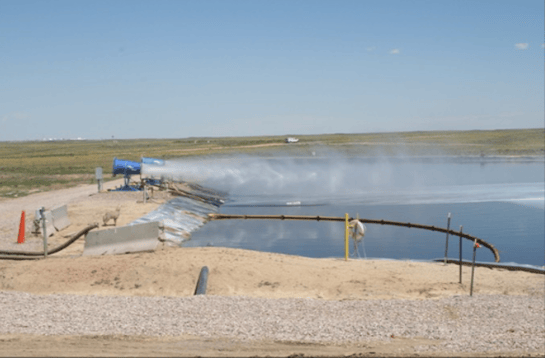 Cannon Overspray Considerations
Other considerations during overspray operations are the mist digestion of dissolved solids back into the internals of the cannon fan blades and the fouling of the spiral nozzles, as noted in this Salton Sea study with a few notations from the study bulleted below.  Snow cannons offer an optional vibration shutoff to combat digestion concerns.

Figure 20. Mist digestion inside the cannon

Figure 21 another type of pressurized nozzle system has recently entered the market. The design places a few pressurized atomization nozzles just above the top of the surface water.

This helps the system alleviate some overspray concerns. What the system doesn’t provide is enough evaporative spacing above the water level, where studies have shown higher levels of saturated water vapor interfaces.

Based on the Craig & Gordon model from 1965, turbulent, dryer wind is needed to create an uplift into the higher layers from their modeling interfaces. 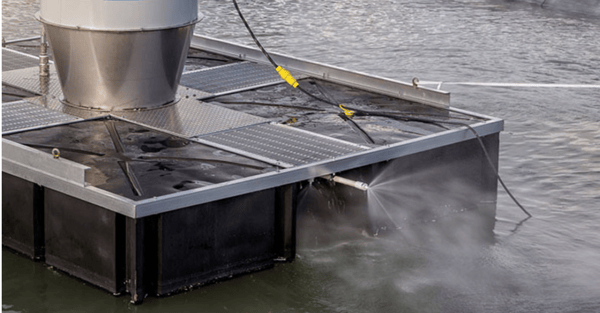 Efficiencies in electrical consumption during evaporation bear mentioning when comparing the differences between rotary atomization and pressurized nozzles for enhanced evaporation projects.

Table 2 depicts the electrical differences between e3 Solutions' rotary atomizers and a typical cannon setup. The cannon needs a separate 160kW/h water pump in conjunction with a 75kW motor to spin the cannon blades versus e3 Solutions' Varimax 60 unit only using 9.7kW/h.

It does mean it will cost you more per 1,000 gallons of the operational expense to use a snow cannon versus an E3 Varimax accelerated evaporation system to achieve a similar amount of evaporated volume.

Rotary Atomizer Advantages
There are many sustainable advantages related to using rotary atomization versus pressurized nozzles.

The electrical cost and cost per 1,000 gallons evaporated show two of the main differentiators in the side-by-side comparisons. The cannon-style evaporator aims large water droplets high into the air with most of them raining back.

Contact one of E3’s evaporation experts to discuss how rotary atomization will effectively respond to any of your accelerated evaporation needs.

Editor's Note: This post was originally published in September 2020 and has been completely revamped and updated for accuracy and comprehensiveness.